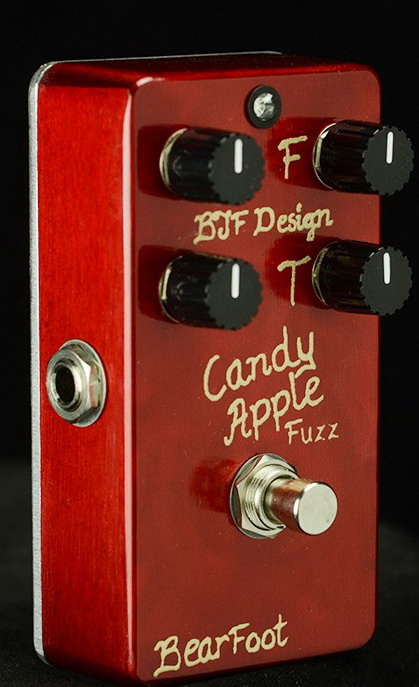 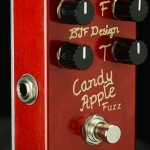 The CAF was one of Bjorn’s original BJFe designs (the first ones were the BBOD, DRD and CAF).

It is a Germanium hybrid…it uses a regular 9V input…it’s almost impervious to where it is in the signal chain, so it will go places and do things most other Germ-based fuzzes just can’t because of their design. Vintage, crazy, ripping Germ fuzz with the convenience of LED/9V and unrestricted
placement…that’s the Candy Apple Fuzz!

(NOTE:  Turning the N knob re-biases the transistors and causes scratchy noises. This is normal…DON’T PANIC!!)

The Candy Apple Fuzz is about as versatile a germanium hybrid fuzz as I can imagine. It has huge amounts of gnarly, raspy chainsaw fuzz available but, thanks to the range of the Fuzz and Nature knobs and the new Treble control, it comes all the way down to a tasty, dynamic, edge of dirt fuzz.

It also has the best Octave I’ve heard of any fuzz…it literally tracks the entire neck from a dropped D – D all the way up and off the end of the
fretboard. That magic spot lies somewhere between 11 and 1 o’clock on the Nature knob. You can also find the Octave, turn the fuzz down, and get an almost clean Octave to punch into your favorite dirt pedal for a unique solo sound.

The Candy Apple Fuzz is one of Bjorn’s first BJFe circuits (along with the BBOD and DRD). It was made to cover the nastier side of vintage fuzzes and it does that and more. Over the years, the one recurring request was to make it a bit smoother and more musically manageable. When it came time for the BearFoot version, he did just that by adding a Treble control to reign in the rasp as needed, and he also adjusted the circuit to germanium transistors, which are smoother and more musical to most ears. BUT silicon has its own musicality and many just like the full on unruliness and extra rip of silicon, so now you have a choice!    Gold = Germanium  Silver = Silicon

“The CAF is just sick. HUGE amounts of gain, very smooth or raspy, and the bias knob grants tons of textures and gating stuff.”  (USA, October 2013)

“Candy Apple Fuzz: Without a doubt my favorite of the bunch. Insanely rich in harmonics and artifacts. When stacked, this pedal makes my tone sound as if something, somewhere along the signal chain is about to explode. It’s almost as if the treble of my signal rolls off a bit, but there’s tiny snippets of treble on 10 coming in and out of the signal, like electrical charges. I have heard other fuzz boxes do this, but they always seemed so chaotic. With the CAF, you can hold a power chord and hear tiny frequencies ‘move’ around and give a slight tremolo effect. It sounds alive, organic, awesome… When playing single lines, it gives me a pretty good Eric Johnson lead tone vibe. I am not claiming it to be just like his 800 lb. violin tone. I am saying it has that vibe. As an EJ fan, I am more than pleased with that discovery!

Seriously, sh*t is getting thrown in the Emporium. I am buying this pedal!”  (USA, August 2013)

3)  Egnater Tweaker combo and #2 was a Silvertone 1484 in the studio, which sounded awesome! My reviews will reflect the use of both of the amps and how the pedals interacted with each amp.

“CAF: Ok, so this one was interesting. Most of what I’ve heard about this one was how great it is gained up and how cool the glitchy-ness is. And yes, that is one part of the pedal that is really, really cool. Honestly, that’s the part I thought I would gravitate towards the most. However, that’s not at all how it went. Though that glitchy-gainy thing is completely awesome, I found myself spending most of my time with the gain much lower…

I love my fuzzes fuzzy, but I also love it when I play chords with the fuzz and have the fuzz be able to track the chords…where you can clearly hear each note. And this one could do it in spades. It had fantastic clarity riffing on just about any classic guitar riff I knew. There was fuzzy edge to it, but it retained the chords so well. It sounded great through the Tweaker, but it really came alive through the 1484 (I assume due to the extra headroom). Very clear, but fuzzy. Kinda hard to explain, but I loved it. Count me a fan.”  (USA, August 2013)

4)  GEAR: a couple of solid- and semi-hollow body guitars with P90s through a BF Princeton style amp.

“As a lover of fuzz, I expected to like this one the best of the bunch – and I did. I appreciated how musical the gating is on this bad boy, and how fat and raunchy it can be. While never getting close to low gain, I did appreciate the usable range of the gain on the fuzz knob. I mostly kept it around 10:30, though. I pretty much set the tone knob and played with the variety of tone shaping available in the Nature knob. I preferred it around 3:00, but the 12:30ish sweet spot yielded not so much octave sounds, but what I’d call gated ring mod sounds! Very cool. It was especially prominent with the fuzz rolled down. I was lucky enough to receive a BA Scarab Deluxe during this tourbox visit, and ended up preferring the CAF (although I would like to try the silver/silicon version).”  (USA, October 2013)