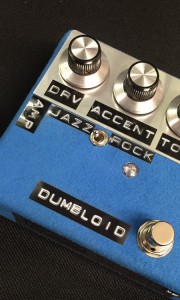 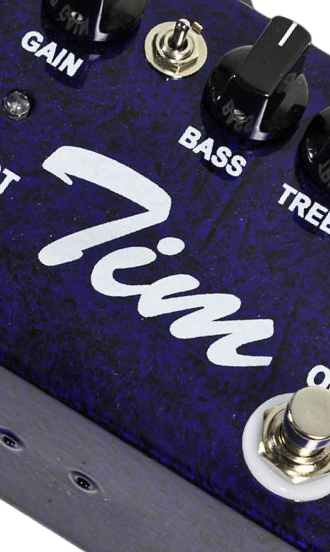 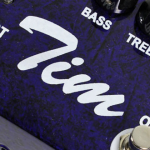 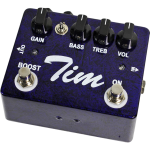 Paul Cochrane “TIM” Overdrive
Tim overdrive boost a very versatile, extremely transparent, sweet pedal. This has subtractive designed tone controls. Turning to the right extracts bass or treble. The Tim pedal has a second stage adjustable boost with a single tone knob. It also has a super cool effects loop – notice the effect Send and Return on the back of the unit, cool oh yeah. You can set it so your delay will come on only when the Tim is clicked on.
Specs:
• Pedal is hand made in the USA by Paul Cochrane
• True-bypass
• Switch Craft jacks
• Size: width=4.6″ depth=3.5″ height=2.9″
• Weight: 547 grams
• Power: 9VDC battery or a standard “BOSS” style center pin negative 9VDC power supply
The dip switches change the clipper circuit. With both down you’re at the least compressed symmetrical setting. That just means that both sides of the signal wave get clipped the same amount. When the switches are up (on) it compresses more with more distortion, but still a symmetrical clipping. You’ll notice a reduction in volume because the signal gets clipped sooner. With one switch up, and one switch down you’re clipping one side of the wave harder than the other – asymmetrical. That’s a setting that a TIM pedal doesn’t have. You wont hear a difference between which switch you have up or down when using the pedal by itself, but if you stack it with another pedal you might.

This is a little tricky to explain, but some pedals have asymmetrical clipping going on. The top part of the wave will be clipped harder than the bottom. Or another pedal might do the opposite – clip the bottom hard, and soft clip the top. The dip switches in Timmy let you pick which side you hard clip, so it might make it sit better with another pedal if you have Timmy hard clip the top, while the other pedal hard clips the bottom. That’s sort of what goes on in a tube preamp with several gain stages.

The Timmy pedal is a smaller boxed version of just the main section of the TIM.
The Pedal is a flat/clean booster to mild crunchy overdrive effect. It’s not a high gain compressed type of lead pedal. This is more about adding boost and distortion while keeping the punch and dynamics of the amp. It has a main mode of operation, and a boost mode that’s meant to kick things up a bit. Also included is a post effect series FX loop. The Timmy does not have the boost section or the FX loop. The main mode has gain/bass/treble/volume controls. The bass and treble controls are “cut” style controls. That means that as you turn them clockwise they will roll off the bass and treble frequencies. Zero (7 o’clock) is flat – no cutting of the frequencies. It seems backwards, and it is!
The bass control is pre distortion. Most pedals roll off the low end before you distort the signal to keep things tight and clear. A lot of low end distortion can get real muddy real quick. But what that means is you don’t have the low end there when you need it for cleaner settings. The bass control will allow you to keep all the low end for the cleaner sounds, and dial it out for the good crunchy stuff. The treble control is post distortion. Like the bass circuit most pedals will have a preset hi end roll off to keep the pedal from being fizzy and noisy when distorting, but you’ll lose the hi frequencies for the cleaner settings. So for cleaner settings you might have the treble on zero (7 o’clock) for all the highs, and as you turn up the distortion you would roll back the treble to keep things smooth. Being able to control the pre and post EQ gives you the ability to kill the evil mid bump a lot of pedals have preset into them. You might have them on zero for the cleaner stuff, and rolled back to something like 3 o’clock for the distortion tones. Don’t be afraid to roll them all the way off!
The boost mode is a strange little gain/volume boost circuit. It’s not meant to be a two tone on the fly type of circuit. It’s more about if the gain cranked isn’t enough you’d kick this on. The drive control on the back of the pedal changes the gain of the clipping circuit. The tone control effects the low end of this gain circuit at high boost levels. I think it works best when the main mode is already set up for a nice medium distortion. Then kick on the boost for some more hair. There’s a pull pot on the back of the pedal that changes the clipping circuit to react faster. It will distort with lower signal levels increasing distortion and compression. It effects both modes of the pedal. The Timmy pedal has this function inside using two dip switches. Both switches up (on) is equivalent to engaging the pull pot on the Tim pedal. Both down is regular mode. The use of two switches allows an additional position with on switch up and one switch down which sets the pedal for asymmetrical clipping.
The FX loop is a series loop that comes after the “TIM” effect. Anything here will effect the pedal, but not in bypass mode. This is nice for stacking effects. A graphic EQ pedal works well here to really nail down the pedal to whatever guitar/amp you might be using.