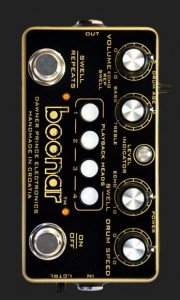 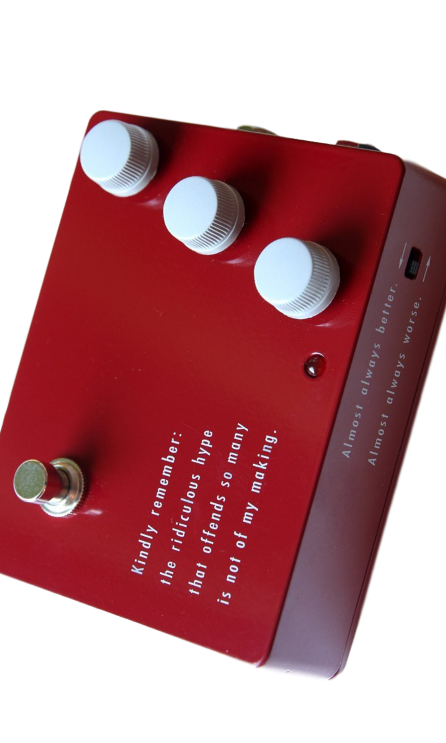 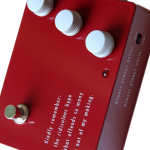 When the original Klon Centaur professional overdrive was released in 1994, it was one of the very first boutique overdrive pedals on the market created for the player interested in fine-tuning their tone. Boutique in every sense of the word and hand built by its creator Bill Finnegan, each Klon Centaur was carefully crafted with premium and carefully selected parts. As other boutique pedal makers developed products throughout the decade and focused on expansion with other models, Finnegan stuck with the Klon Centaur as his sole focus.

Built around a custom cast aluminum enclosure, the Klon Centaur overdrive was marketed as providing an overdrive tone that would complement the guitar and amp it is used with, rather than impart its own sound. And if you wanted  Klon of your own, the process first required that you call Finnegan himself, discuss your playing style and equipment, and then he would let you know if he felt the Centaur was an appropriate pedal that would work for you. There was no dealer network available to purchase a Klon Centaur.

This was not done out of snobbery, but because Finnegan’s desire was to make sure that the customers knew exactly what they were getting with the Klon and he wanted to make sure customers would be happy. As Finnegan continued to build Klons,

demand grew and he became heavily backordered. For years, his business was maintained this way and Finnegan refused to change production methods. As a result of the backorder, an impatient buyer could go on Ebay and pay a hefty premium to avoid any waiting period.

The Klon Centaur is highly regarded not only as an overdrive, but for its boost characteristics. Using a Klon as a boost provides a push that enables higher gain to emerge out of a tube amp. Essentially a mostly tonally neutral design, but with a small midrange curve, this is actually helpful for guitarists to help cut through the mix for lead playing. In fact, it’s my opinion that running a Klon into a blackface-era Fender (which is notably mid-scooped by design) is a match made in heaven when used as a boost or an overdrive. The addition of mids really helps shape the sound. Nobody knew back then what the Klon circuit was and just what made a Klon a Klon. But it was different. And it was shrouded in mystery since the board itself was cloaked in epoxy. This no doubt added to the overall mystique of the Klon.

In 2009, Finnegan decided he had enough of building Klon Centaurs and took his final orders before discontinuing production. After a production run of approximately 8,000 Klon units tested and built by Finnegan himself, he started a redesign project with the goal of producing a pedal that could be more easily produced by using an outsourced company. In 2012, the KTR was born. The KTR was essentially a Klon built into a smaller enclosure using smaller surface mounted components, a standard 9v DC jack, and also now included a toggle for choosing between buffered or true bypass. Finnegan was essentially addressing the complaints some people had about the original Klon Centaur (â€œMake â€˜em smaller, make â€˜em true bypass, and let me use a standard Boss style AC adapter).

The KTR is unique in its design layout and also has some Bill Finnegan humor built in. The phrase on top, Kindly remember, the ridiculous hype that offends so many is not of my making,pokes at the internet community that for years complained about the second-hand pricing as well as limited availability of Centaurs. The switch between buffered and true bypass isn’t marked as such, and is instead marked as, Almost always better (for buffered) and Almost always worse (for true bypass). Finnegan always believed that a quality buffered bypass was the ideal design choice, so one can note that sarcasm here when he went ahead and provided the requested true bypass option  but not without Finnegan having the last word on the matter! True bypass remains the most desired bypass system by most users, but there are other designers, including Pete Cornish out of the U.K., who also strongly favor the use of buffered designs. For those that like to peek inside circuit boards to discover any secrets, Finnegan has the KTR circuit board marked next to the clipping diodes on the boards stating, These are essential!In previous interviews, Finnegan has attributed much of the unique qualities of the Klon to very specific diodes that he spent a great deal of time testing. That same batch of diodes (no longer produced, according to him) used on the Centaur are the same as what the KTR uses as well.

Well, enough about the history How do these units sound when placed head-to-head? To find out, we spent time with an original gold Klon Centaur and a new production KTR.

We used a number of guitars and amps to capture and pick up any variations in tones. The classic combinations of a Fender Stratocaster and a Fender Super Reverb along with a Gibson Les Paul into a Marshall Super Lead were the go-to configurations. We also used combinations with high-gain amplifiers including the Soldano SLO and Mesa Boogie Roadster.

I was skeptical that the new Klon would sound just like the old one. In theory, while the surface mount components are smaller and have the same appropriate values, I still believed that the KTR would show its differences. Here are the results:

Fender Stratocaster into Fender Super Reverb as a boost (Gain control at 9:00, Treble at 12:00, Output at 3:00): The sound between the Centaur and the KTR to my ears was identical.

Fender Stratocaster into Fender Super Reverb as an overdrive (Gain at 2:00, Treble at 11:00, Output at 11:00): The Centaur and KTR sounded identical.

That theme continued¦ It didn’t matter when we used, whether it was the Gibson/Marshall being tested with the Centaur and KTR as a boost or overdrive, or when we ran into the more contemporary high-gain amps. The KTR sounded just like the original Centaur.

For my own curiosity, I also spent time with numerous Klon Klones (the circuit was revealed on the internet years ago when it was de-gooped, which started a new industry of folks taking the design and releasing their own Klon circuits). Interestingly enough, I played through five of them and these all sounded different. Yes, you read that correctly. Some were closer than others, but NONE of them sounded exactly like the Klon Centaur or KTR. Bill Finnegan has not paid me to state this fact. Can the variance be attributed to the diodes or some other factor in the design? It’s hard to say, but I found this very interesting.

Back to the Centaur vs KTR, there are certainly people on the internet that talk of slight differences, and indeed this could be the case between any number of reasons as component tolerances can have variances. Also, a slight shifting of the knobs to any small degree could also create a different tone when making head-to-head comparisons.

At the end of the day, there are going to be people who argue that nothing but an original Centaur will sound and do what a Centaur does. Some people may be concerned with investment protection or have hopes that the values of Centaurs will go up. You know what? The originals probably still will be collectable and go up in value regardless. But as far as the sonic differences, I just don’t hear them. See the gold Klon pictured? That’s mine “ And I’m here to tell you the red KTR next to it does what the Centaur does. So for this story, sonically, the KTR succeeds.

If the Klon sound and tone is what you are after, there is no point in paying $1,000-$2,000 for an original Centaur unless you are after collectability. And certainly there’s nothing wrong with collecting. I collect many things and have no shame in that! But as a tool to use sonically, and at $269 brand new, the Klon KTR is the real deal. It’s pedal board friendly, has additional options for true bypass/buffered, and it does what Klons have always done well. It’s great to have them available again.

In true mysterious fashion, there is no official Klon KTR website. And Finnegan won’t tell us what KTR stands for (I’ll go with Klon The Reissue as a guess). Finnegan’s original Klon-siberia.com website only contains an older message discussing the new model. So if you’re after a KTR, just Google them online and pick one from an assortment of dealers who have them for sale.