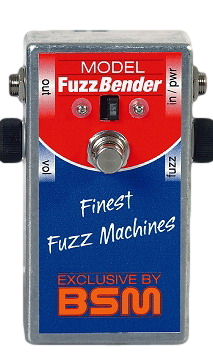 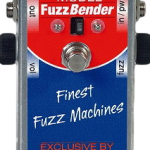 Around 1960 the British Gary Hurst developed the first known distortion unit for electric guitar, which was available only as a custom order. So only a few were built and sold. Later, in 1965, Gary Hurst joined the team of Sola Sound, which was based in London. As an OEM-product, Sola Sound built Hurst´s circuit, slightly modified and in a large production number, now called Tone Bender MKI for the fellow British company Vox. Once developed and done, Sola Sound offered a minor number of the Tone Bender circuit under their own flag and brand. In fall 1966 Arbiter, the giant in the British music business, introduced a Fuzz unit under the name Fuzz Face, which looked unique, but was actually just a modification of the Vox/Sola Sound MKI. The Arbiter Fuzz Face generated a similar distortion sound like the Tone Bender MK1, but with more bass.

The BSM FuzzBender – besides the usual volume control – comes with an additional Fuzz control pot, which enables sounds in the range of hardly notable up to extremely distorted. With the help of the little lever switch the user is able to decide between the classic Fuzz Face and – if you look up history – the even more classic Tone Bender circuits. In the left position you will get the sound of a Fuzz Face, including the warm and fat bass frequencies. Set up the Fuzz control to its almost maximum position, turn the volume pot slightly down on your (single coil) guitar, and there you are with a sound, that really reminds of Jimi Hendrix! In the right position of the lever switch you can activate the Vox/Sola Sound Tone Bender MKI – with a thinner, almost hard sounding bass and aggressive highs. This specific sound characterises many British recordings of the Mid-Sixties, e.g. early “The Who”- and “Spencer Davis Group” songs, and also early “Yardbirds”-LPs, when Jeff Beck was still a member of the group. Neil Young also used – as one of the first musicians in the USA – a Tone Bender MKI for his wellknown feedback orgy.

The FuzzBender’s magical tone is achieved best by the interaction between guitar player, guitar pickup and Fuzz unit. Therefore it should be connected in the signal path directly after the guitar. The FuzzBender is powered by a 9V battery with a current consumption of approx. 600 uA. The average output level is -3dBm, the maximum output voltage is 1V, when the strings are struck really hard. Note: The positive pole of the battery is ground.

If you have any questions concerning our products, especially the BSMFuzzBender, our tech-head and mastermind Mr. Bernd C. Meiser would be happy to talk to you. So don´t hestitate any longer and send him an email toinfo@treblebooster.net to contact him.