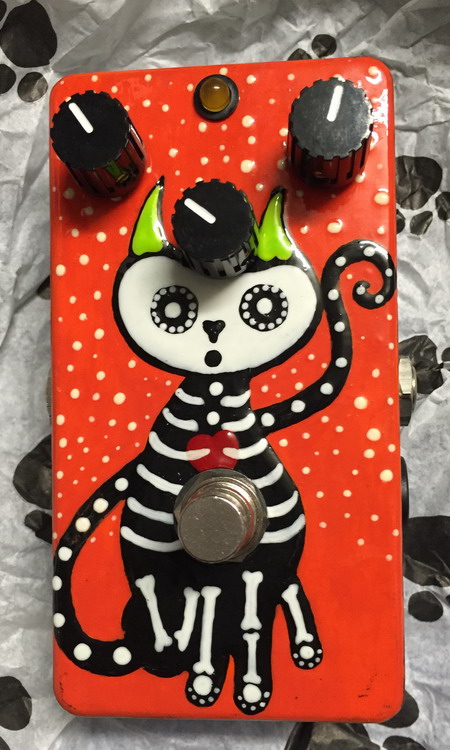 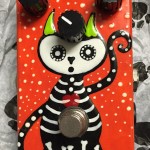 The Honey Bee sounds and reacts like small vintage combos with nicely worn tubes and speakers.

The Volume knob controls the overall volume without changing the distortion. The Drive knob varies the distortion complexity and saturation. The middle control adjusts the “nature” of the EQ. Begin with this control at straight-up “noon.” To the right there is a subtle adjustment to the upper frequencies with the most treble at full clockwise. Turning this control counterclockwise from noon adds in lows and changes the distortion
saturation interactively with the Drive knob. And at full counterclockwise, the Honey Bee is fully bloated and saturated like a small combo pushed to its limits.

“Honey Bee Overdrive: Ok, this one I had heard a lot of, and was really looking forward to play in my rig. Well, it didn’t disappoint me at all. It took a little getting used to at first, because I have some other lower gain pedal that I was used to and the Honey Bee has a little different voicing, but it’s not a bad thing at all. The really best thing about it for me was how it reacts to change in picking dynamics. One of the best pedals at this I’ve tried so far, I could see how a simple setup with just this pedal could produce many shades of dirty tones. Also stacks great with everything I’ve thrown at it.”  (Canada, February 2014)

“Honey Bee OD – Okay, I admit when I first tried this pedal, I thought ‘WHAT?? Why is every raving about this – it is SO low gain’. BUT… then I realised that my guitar volume was still on around ‘5’. And here is the thing: This pedal cleans up so well using the guitar volume knob that it confused me at first.  With the HBOD, I found that if you wind the volume knob up to 10, you are in some beautiful tone country. As soon as you wind the volume back past 8, the tone immediately cleans up and at around 6 you have a wonderful, clean, chimey sound happening. The other two pedals didn’t clean up nicely until I got the volume down below 3!!

Using this knowledge, I found the HBOD to be as everyone else said – beautiful clear overdrive, but still with a over riding clarity to them. Notes had some ‘bite’ to them when you dug in, and the pedal seem to be quite clever and responding to the difference in playing touch. Melodic and lead lines just sang through this pedal. Chords were a little ‘thin’ but still quite satisfying.  A great pedal if you are a second guitar in a band where the other guy is doing more bottom end chordal work I think. A great pedal too I think if you are singing with an electric guitar and don’t want the chords to overpower the overall mix.

The pedal responded nicely even with the Mira switched to single coil mode, but overall I preferred the full humbucker sounds.

Honey Bee is a good name for this pedal. Tone Report: Warm honey drizzled over a crunchy waffle.”  (Australia, February 2012)

“I was most eager to get at the legendary honeybee so I tried it first – it didn’t dissapoint – extremely amp-like and spongey I was at first surprised by how low the gain was but I quickly adapted and this became part of its charm – sorry to use cliches but it is more touch sensitive and dynamic than most other drives – a refreshing change from the TS styles – I preferred the HB with humbuckers as I could squeeze a bit more sustain out of it that way – adding a comp – ross clone – in front also helped – I found myself mostly playing crunchy stonesy/black crowes rhythm tones (Brown Sugar sounded fantastic through the HB!) but I could also get some nice free form jazzy sounds out of the HB, with the Ibanez.”  (Australia, October 2011)

“HBOD…This really is a gem of a pedal! I had a lot of fun using just one amp and this pedal for looping and making it sound like two different amps – it’s just that good.”  (Canada, March 2014)

“HBOD – Now this pedal is an absolute gem. Though the gain range is tiny, you really get a sense of playing through an actual overdriven amp rather than a pedal boosting a clean channel. The midrange is very prominent, and the nature knob is a great design. I had some of the best tones I’ve heard with my amp when I had the Bee running just under full gain/nature, and volume just boosting unity to the clean. Gorgeous!”  (Canada, February 2014)

“HBOD – Ah, the famed Honey Bee. I probably had the most fun with this one from a usability standpoint. That sounds like a contradiction of terms, but hear me out. This pedal’s “powerband”, where I think it sounds best, is strikingly close to that of my own amp. What I mean is that they seem to shine with similar levels of gain. What got me going was that I liked the sound of the HBOD into my clean channel better than I like the overdriven tone of my own amp! (*shakes fist*) Back to the EQ drawing board…thanks a LOT DonneR…
Seriously though, what stood out to me about this pedal was how well it responded to really digging in. The harder I hit the strings, the more it gave back, to the point where I was just thrashing on the guitar and it just kept serving up the goods, as if to say “C’mon Justin…is that ALL you’ve got?” To which I responded “Yes, HBOD, that IS all I’ve got. Unless you’re buying me new strings made of unobtanium.”  (Canada, May 2014)

“Honey Bee…I had to play this very quietly initially, as the neighbours were in, it was later at night and I just couldn’t wait any longer. Started with the Nocaster, and was instantly impressed. Just adds that little bit of warm and break-up, which is the hardest to find (especially at low ‘bedroom’ volumes) in my opinion.  String clarity was there throughout, and there was a little bit of ‘chime’/‘bloom’ which I liked. Think “If It Makes You Happy” – Sheryl Crow.

Day 2 of the test found me starting and concentrating on the Honey Bee. In fact, I got a range of sounds that so suited my rig that I then spent a while trying to get my Pete Cornish CC-1 to sound and FEEL like the Honey Bee. I love simple pedals, and the HB is the epitome of this.  The HB lacks
treble, imho. It’s a bit warm and I found myself dialing the treble knob in to a minimum of 4 o clock. But, ironically, this lack of treble helps my rig. I’m a Strat/Nocaster user, and with the Jim Kelley, treble is easy to dial in… and harder to tame.

Nonetheless, I will be getting one of these. I LOVE my custom pedals, so I’ll see if and when Donner if offering some of these, and press the button.”  (England, June 2014)