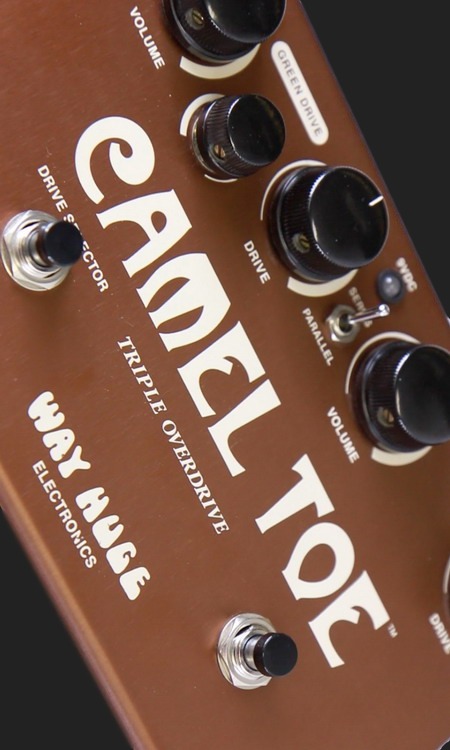 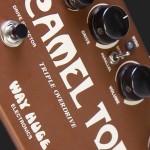 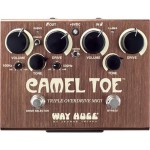 WAY HUGE® CAMEL TOE™ TRIPLE OVERDRIVE MKII
WHE209
This pedal combines the Green Rhino Overdrive and the Red Llama Overdrive into a single housing, featuring an all-new Hi-Cut control for the Red Llama circuit, a Drive Selector footswitch to toggle between the two circuits, and a Series switch to combine

The Way Huge Camel Toe Triple Overdrive is an incredible coming together of the Green Rhino overdrive and the Red Llama overdrive. Both of the drives in this pedal sit in the gorgeous mid gain style of pedal that is loved by blues and rock players for its sweet sustain and clarity.

The Way Huge Red Llama was one of the most popular drive pedals the first time around in the 90s. Now it’s back and every bit the pedal the world loved and more! With plenty of gain on tap you can take the Red Llama from a gritty crunch right through to a full on saturated distortion. Designed to sound great through a huge variety of amplifiers you can be sure the Red Llama is going to be a great addition to any rig!

The Green Rhino Overdrive Mark IV is more compact than its ancestors, but it has more force than ever behind its mighty charge. In addition to the Volume, Tone, and Drive controls of the original, this beastie has the MkII’s 100Hz control and an all new 500Hz control so you can cut or boost your lows and mids by 12dB each way.

The Camel Two can be run in one of two ways. Either as a switch meaning you can go between the smooth midrange boost of the Rhino to a dirtier and grittier Llama. Or as a stack where the Green Rhino is always on and you can add in the Red Llama at a moment’s notice getting you in to sweet heavy lead tone.