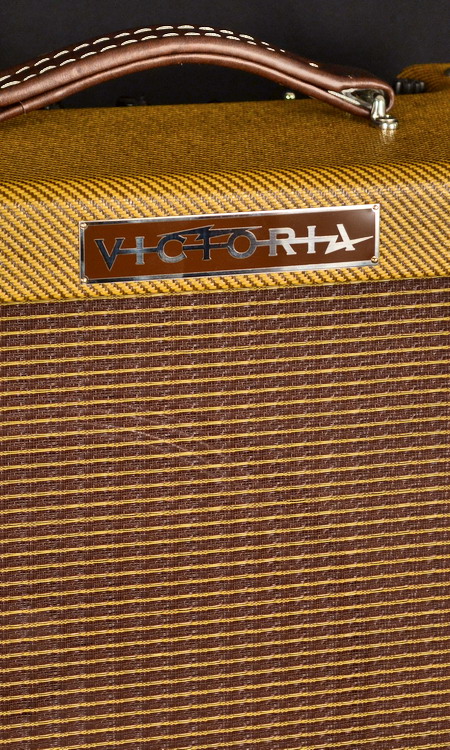 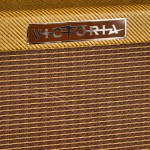 The Trem of the Trem is a classic mid ’50’s tweed design based on the venerable Fender 5E9-A Tremolux. It employs 2 cathode-biased 6V6’s to produce a modest 14 watts of power. The footswitchable trem effect is achieved by modulating the bias of the phase inverter, yielding a smooth musical effect that is not effected by the volume of the amplifier. It features a bright and normal channel, master tone, speed and intensity.
An Eminence Legend 15 inch speaker is standard, with other configurations available upon request. This amplifier, the 5E9-A type, is highly prized by collectors and tone aficionados for its rich, harmonically dense tones and is considered by many to be the definitive tweed tremolo amp. An important addition the Victoria Vintage line, the Trem of the Trem allows guitarists the experience of the vintage 5E9-A without the perils involved with relying on a 50 year old piece of equipment.
I think Fender stopped making them in ’57, and I have no doubt why. The tremolo on this amp is wacky! It’s very prominent and smooth, with a different bounce and attack than the later power tube modulated versions. I think it’s more effective and musical, but it has its quirks. The design and the way the trem is incorporated into the circuit is a bit imperfect. For one, when the depth control is all the way up, the phase inverter says ENOUGH and the amp loses its mojo. Turn the control to 10, you’re in pulse-tone heaven, but a nudge past to 12, and you’re scratching your head.
Now trust me, we came up with ways to alleviate this maddening problem, but each fix presented a sonic compromise to be dealt with, none of them (so far) acceptable. The second little thang about this circuit is that without the footswitch, it’s impossible to fully turn off the trem effect. I don’t know whether that could officially be considered a design flaw, as the footswitch is a part of the design, (and one is included) but I’m sure many an owner of an original 5E9-A has had to hit Mike Matthews up for a new footswitch.
In the end, I felt that if we were going to present this amp in the Victoria line, it had to be done as intended, warts and all. After hearing one, I know you’ll agree. (I know, the original had a 12 and we’re using a 15, but hey, the 15 sounds better to me! We’ll build it with a 12 if you want!)