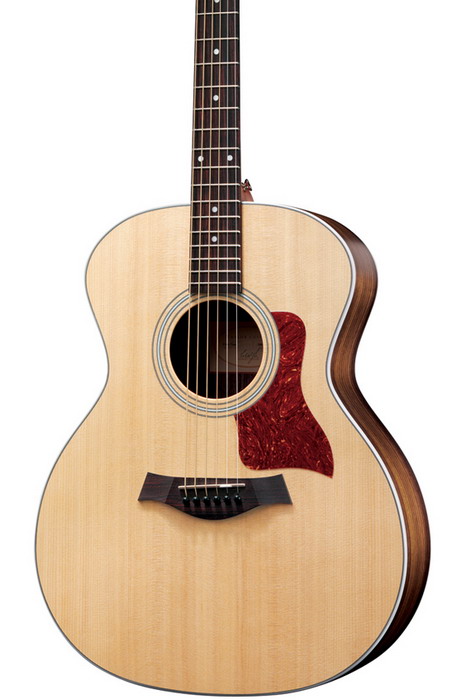 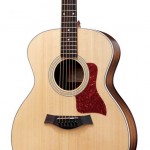 Our layered rosewood 200 Series models hone in on the fundamentals of a great guitar-playing experience to give you clear, balanced tone and great intonation. Choose from an optional cutaway and Taylor ES-T®electronics. If you crave an extra splash of visual style, don’t miss the all-black layered maple 214ce-BLK.

One of the most popular and traditional guitar woods of all time, rosewood takes the basic sonic thumbprint of mahogany (which has a strong midrange) and expands it in both directions. Rosewood sounds deeper in the low end and brighter on the top end (one might describe the treble notes as zesty, sparkly or sizzly, with more articulation). If you look at its frequency range visually, rosewood would appear to be more scooped in the middle, yielding less midrange bloom than mahogany. Like mahogany, rosewood’s vintage heritage has helped firmly establish its acoustic legacy. It’s a great sound in part because we know that sound. In some music circles in which preserving the traditional sound helps bring a sense of authenticity to the music — certain strains of Americana, for example — rosewood has an iconic status. Also like mahogany, rosewood is a versatile tonewood, which has contributed to its popularity. One can fingerpick it, strum it and flatpick it. It’s very consistent, so players can usually rely on it to deliver.

Goes Well With: Most applications. If you like a guitar with fuller low end and brighter treble (bluegrassers, for instance), rosewood will do the trick. Its high-end sizzle and clear articulation will benefit players with “dark hands”. If you’re looking for a traditional acoustic sound, a rosewood Dreadnought or Grand Auditorium is right up your alley.

Be the first to review “SOLD TAYLOR 214” Annulla risposta