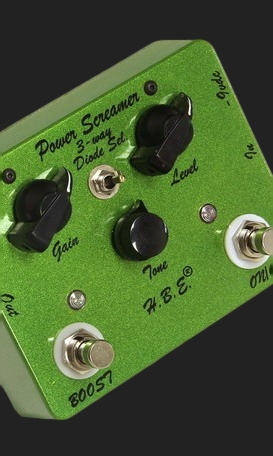 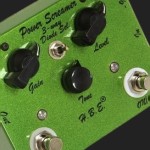 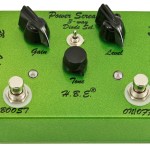 The Power Screamer is probably the best known of the HBE pedal range. It’s basically an overdrive pedal, based on the JRC4558 op amp, as used in many classic and boutique pedals.

There are the usual gain, level and tone controls, but the Power Screamer has a couple more tricks up its sleeve.

There’s a three-position toggle switch which allows you to change the diode used in the circuit. Then there’s a second footswitch for adding around 10dB of extra boost.

And finally, one of the HBE custom shop options involves adding an extra toggle switch which affects how the extra boost works: normal or ‘fat boost’.

We started with the extra boost switched off and the three main controls at 50 per cent, in order to test the three diode settings… and were pleasantly surprised by how much this little switch can change the tone.

The left position is the ‘classic overdrive’ setting, which produces a tight, mid-rangey sound not unlike a Tube Screamer.

Over on the right, the sound is a little brighter, but heavily compressed; this setting is designed to emulate the ‘sag’ produced by running a small valve amp flat out.

In the middle, the compression is less obvious, and the sound seems to have more gain, bass and treble – this is the most full-throated sound of the three.

Overall, the Power Screamer’s sound is somewhere between a classic Tube Screamer-style overdrive and a more grainy-sounding fuzzbox.

The notes never melt completely, as with most fuzz pedals, but there’s always a hint of danger, a slight break-up on the edge of every note.

The pedal also does something very pleasant to the harmonic make-up of notes, especially with single-coils – it’s as if there’s the slightest hint of an octave (above) sound creeping in on certain settings. With the added level of boost, there’s more than enough gain to push most amps over the edge.