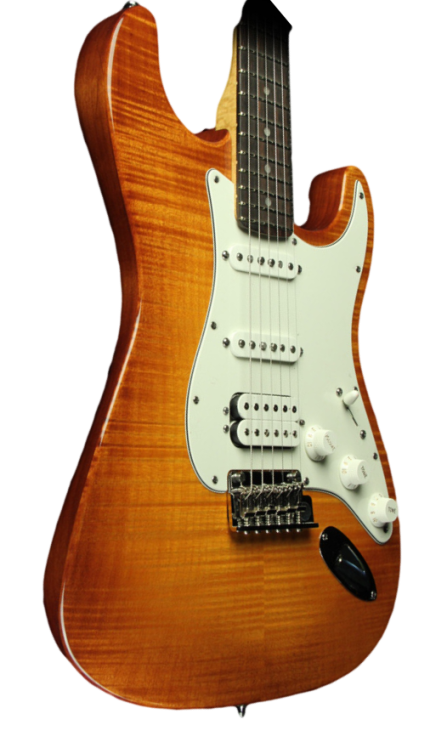 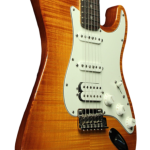 Earlier this year, Fender released their Select Series—three Telecasters, two Stratocasters, a Precision Bass, and a Jazz bass—intended to bridge the gap between the American Deluxe Series and the company’s wide variety of Custom Shop instruments.

It’s not the first time Fender has tried to take their most classic instruments upmarket. And for lots of players that like a Stratocaster to be a Stratocaster, such efforts confound. But in the case of the Select Stratocaster reviewed here, there’s plenty to suggest that this latest attempt is much more than a branding effort.

The bridge pickup has all the clarity and brightness you’d want from a Stratocaster’s most biting voice, yet with a more civilized air.
Knocked Out
Lying there in the lovely tweed case, the Select Stratocaster is breathtaking. The dark cherry burst flame maple top, which caps, and alder body induces covetous thoughts even when you’re not considering the high quality of the materials. The neck and fretboard are flame maple as well, and it’s hard not to be struck by the beauty of the wood on this instrument. The medium jumbo frets and C-shaped neck both feel familiar and fall under your fretting hand in a way that will seem like an old friend to anyone who has played a ’60s-vintage specimen or a Stratocaster inspired by one. I was less accustomed to the neck’s compound (9.5″-14″) radius, but once acquainted, I found it fast, super smooth, and much more comfortable to play in the higher registers. It’s a nice, and functional, evolution of an already great neck.

The Select Stratocaster has deluxe locking tuners, which some players will love and purists may feel indifferent about. The contoured neck heel is a smart and potentially invaluable feature—one that, as a long time Stratocaster owner, I wonder how I lived without. Combined with the fretboard’s widened sweet-spot, thanks to the aforementioned compound radius, the neck heel, bi-flex truss rod, and rolled steel saddles can accommodate infinite action adjustments to suit any playing style.