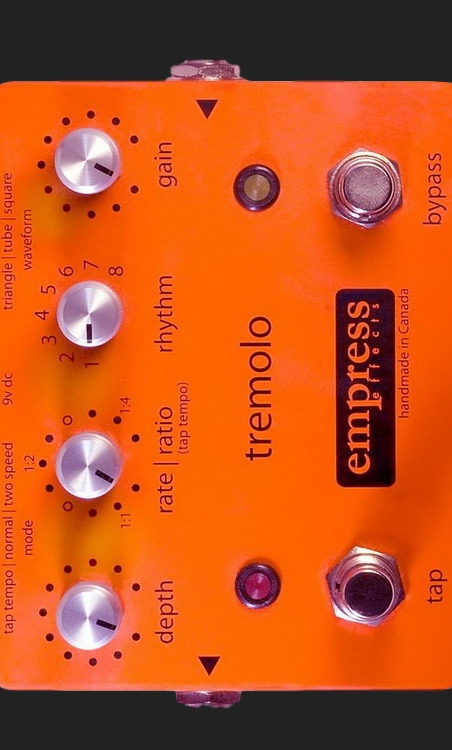 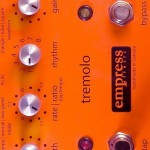 Ontario-based Empress Effects’ Tremolo pedal is housed in a 45/8″ x 35/8″ x 13/8″ die-cast box and boasts a ton of features that separate it from virtually every other outboard tremolo pedal.

Along with chassis-mounted 1/4″ input/output jacks and a 9-volt DC power jack (it does not operate on battery power) the unit’s layout includes a heavy-duty true-bypass footswitch, a Tap stompswitch, three-position mini-toggle Mode switch, three-position mini-toggle Waveform switch, and controls that manipulate Depth, Rate/Ratio, Rhythm and Gain. Production versions of the Tremolo also have an LED above the Tap footswitch to indicate tremolo rate.

With the three-position Mode toggle set to Tap Tempo, the user sets the rate of the tremolo effect with the Tap footswitch. The Rate/Ratio knob sets the speed of the effect when the Mode is set to Normal, or set two different tremolo speeds via the Rate control and Tap switch in the two-speed mode. In the Tap Tempo mode, the Rate control becomes a Ratio control, allowing the player to multiply the tapped rate from a 1:1 to a 1:4 ratio.

Using the Empress isn’t as complicated as it might seem, and with just a few minutes of playing around, it’s quite simple. The Gain control allows compensation for any loss in volume (up to 6db) when the box is set for a deep, slow waveform. Tap the footswitch and the Ratio control adds a perfectly in-time tremolo setting on the whole note, half note, or quarter note. The unit’s ability to toggle between two tremolo speeds is akin to the slow/fast control on a Leslie cabinet. The three-position Waveform toggle offers traditional triangle waveform tremolo (as offered by most pedals), square (for strong, choppy tremolo) and tube (a softer, asymmetrical tremolo more like what you’d hear from a mid-’60s Fender Vibrolux). The eight-position Rhythm selector is a unique and very interesting feature. Position 2 through 8 add different pulsing-rhythm trem effects, while setting 1 is the traditional/even tremolo. With the Waveform switch set to Square and the Depth control turned full up, the Rhythm settings give cool, guitar-synth-like sounds, especially in conjunction with some overdrive.

With its cool, very usable proprietary features and the fact it’s very quiet, the Empress Tremolo pedal gets very high marks all around.