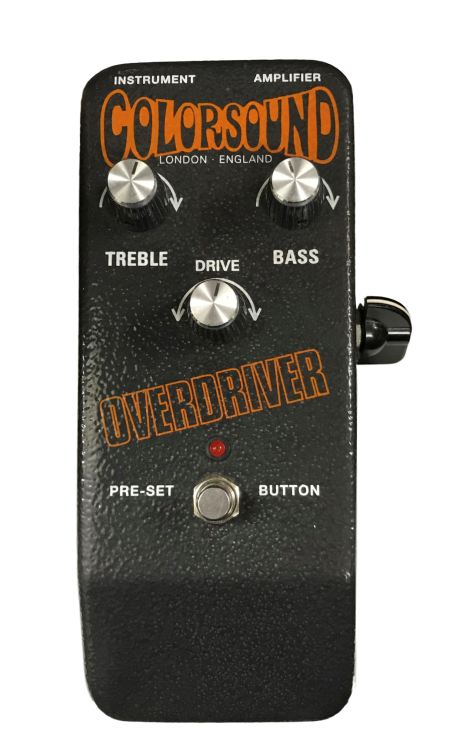 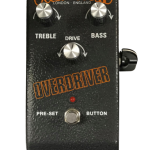 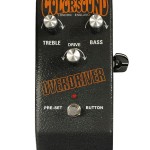 A reissue of the old classic 1971 Colorsound Overdriver, still distributed by Macari’s of London, and hand made by Jake Rothman/Theremin.co.uk at the time I write this (2007). The Overdriver is a bass and treble boost/overdrive pedal that works great with tube amps. It sounds almost like a little amp in a box, and it is LOUD. David Gilmour of Pink Floyd used the old orange Power Boost version throughout the 1970’s on such tracks as Shine On You Crazy Diamond, Have A Cigar, Pigs and many other mid to late late 1970s Pink Floyd songs. He also used it on the 1977 Pink Floyd tour for that incredible power boosted Big Muff lead sound, and used the Overdriver version in the 1990’s. Jan Akkerman of Focus, Marc Bolan of T Rex, and Jeff Beck were other users of this pedal. The Overdriver is a piece of british fuzz history.

The Overdriver circuit is almost identical to the original 18v Colorsound Power Boost released circa 1969-70, but includes a master volume knob, and a bit less headroom and more gain when the drive is set to maximum on the example I own. There were three slightly different schematics for the PB/Overdriver, so some vintage units will sound slightly different from others. The Overdriver gives a very transparent and super clean boost that sounds very dynamic and open. The bass and treble controls give a wide range of tonal options, including a full-on treble boost, and overall it has a very unique overdrive sound that you won’t find in many modern drive pedals. It can make any tube amp have a more hi-fi sound just using the clean setting. The drive control really does not do much, but when you get to the last 10%, the doors open wide. A very nice vintage Fuzz Face type overdrive blasts in. Nothing quite like it. It is great for vintage ’70s rock. At low drive settings the Overdriver opens up the tone of an amp, lightly or heavily coloring the sound (depending on settings), making it a great “always-on” pedal, although it does not necessarily improve the tone of all amps.

Set the Colorsound Overdriver for a light drive and place it before or (or after, depending on settings) a Fuzz Face or Big Muff pedal. This creates a really nice late 1970’s David Gilmour fuzz tone, especially through a Hiwatt amp like the Custom 50 or Custom 100.Â I use the Overdriver for much of the light overdrive tones and some fuzz tones forÂ Dark Side of the Moon and Wish You Were Here, and as a light boost after my fuzz pedals like the Analogman Sunface BC108 Silicon fuzz. I have also found the Overdriver in conjunction with a Big Muff is a great combo to recreate the huge distortion tones David Gilmour used for Pink Floyd’s 1977 Animals/In the Flesh tour, and on the 1978 Columbia Records promotional videos David made for his first solo record. It was also possibly used on the record itself. The dry treble and fuzz from the Colorsound is very distinct when used with the Big Muff in this way. I also leave the pedal on all the time with a very light drive setting, a trick I learned from Gilmourish.com It really makes my Fender tube amps sound better. Gilmour used several other overdrive pedals throughout the years, with the BK Butler Tube Driver being on of his favorites, but nothing has quite that same early Pink Floyd overdrive tone like the Power Boost/Overdriver. You can also find less expensive clones like the Throbak Overdrive Boost. A Boss BD-2 Blues Driver also gets in a similar tone territory.

The Overdriver runs on 9v batteries (an AC adaptor version was also made), and sounds best with non alkaline type. The only real drawback to the Overdriver, other than the high cost, is that even with the master volume set to zero, the minimum volume level is higher than a typical untiy volume level when the drive knob is set high enough for a heavy orverdrive. The circuit does not allow the volume to go down to a unity level, or even to zero. At high drive settings this makes it almost impossible to use on a modern pedal board with other pedals at unity volume, because with any high drive level, the Overdriver will be louder than everything else when switched on. Placing the pedal in a bypass loop with a volume pedal before it is one way to overcome this. The Overdriver is housed the the classic pressed metal Colorsound case (22cm x 9.6cm), with a nice vintage hammerite finish. The bottom of the case pops off for access to the battery.