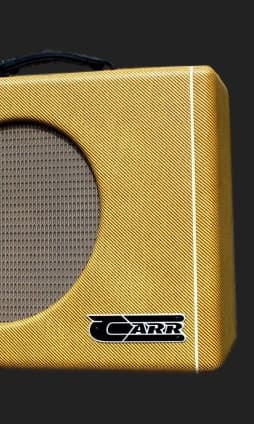 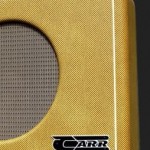 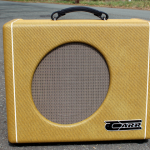 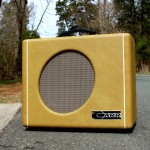 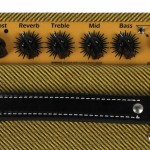 The Mercury V, older British cousin of our award winning Skylark, is back with a highly evolved feature set borrowing the best of the past while rocketing into the future.
The Mercury V is highly touch sensitive with a huge range of English tones from 60s aggressive clean thru 70s rock into 80s and 90s tasty crunch.  Our built in attenuator delivers real power tube overdrive at whisper levels retaining the feel and juice of full volume fun. Like recording on your computer? Just plug the Mercury V line out into your A/D interface and go!  The Luscious Spring Reverb, full ranging Overdrive options, and effective tone controls make the Mercury V an invaluable recording tool.  Home player?  Experience big amp satisfaction with domestic tranquility.  Gigging musician? 16 burly watts in full power means the Mercury V is a commanding stage amp. Mercury V wins the six string triathlon —- Home – Studio – Stage.
Plus, you get everything Carr is known for, in-house crafted solid pine dovetailed cabinets, bleeding edge power supply components mixed with Mid-Century signal elements, and true point to point wiring.  The Mercury V – Scary Good!

The new Carr Mercury V amplifier is the latest offering from Carr Amplification, and is essentially a higher wattage, British flavored rendition of their stellar Skylark amp. This new version of the much loved Mercury comes with an improved feature set over the previous version that is, to be quite honest, darn well impressive. But let us get to the specifics just a bit later…

This new Mercury V really is a new amp altogether. It only shares the basic concept of the previous Mercury:

Other than that, it’s changed quite a bit. While the original Mercury was powered by an EL34, it was a single ended amp, meaning it had a lot of the single ended qualities of a Champ type amp. This version is now powered by dual 6V6 Class A power section giving it a more British feel than before, and at 16 watts, more power as well. When the attenuator is engaged, you drop to 4 watts, where you can vary the output from 4 down to 0 watts.

There’s also many vintage Marshall vintage things about the new Mercury. It has two volumes volumes, one high (treble) frequency volume, and one lower (darker) frequency volume. There’s also a toggle switch that changes the structure of the input signal through the volumes. When it’s up, they are running in parallel, so they’re working in conjunction with each other going into the amp. If you have a darker guitar you can add more highs here, and vice versa if you have a bright guitar. When the toggle switch is in the down position, the two volumes are running in series where one drives the other to increase the gain. Very nice!

There’s also a 3 position boost switch that effects the overall gain of the amp.